This is a text widget, which allows you to add text or HTML to your sidebar. You can use them to display text, links, images, HTML, or a combination of these. Edit them in the Widget section of the Customizer.
Posted on December 13, 2018December 13, 2018 by Vix

The Skull of the Slasher’s Monkey – A Relic of Tipton 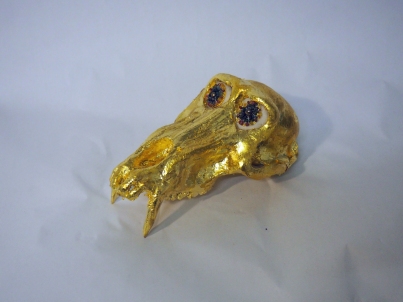 The relic of knowing when to stop.

The Tipton Slasher – real name William Perry,  was a bare knuckle boxing champion who found glory scrapping to get through canal locks first and lost it due to overconfidence and pride.

The Slasher was a heavyweight who rarely lost a fight and was able to use the proceeds of his career to buy his own pub and retire at the top of his game. One of the features of the pub was the Slashers’ monkey, a pet baboon which, when deceased, was stuffed and kept in the bar. Regulars would often decorate the creature with hats and pipes, and give it a pint to hold.

Having been Champion for many years, and six years after his last Championship bout, Perry was approached by a smaller, younger fighter named Tom Sayers. So confident was he in winning that he sold his pub and staked the proceeds on himself, only to then lose in ten rounds. Perry then completely quit fighting to become a pub landlord. The Monkey now enjoys a quiet retirement in the archive of the Black Country Museum, too delicate to be moved, and with it’s hand over it’s eyes in eternal facepalm.

The Skull of the Slasher’s Monkey is made from a resin cast of a Baboon skull, gold leaf, black pearls, gold thread and natural sapphire beads.

The Skull of the Slasher’s Monkey aims to be a symbol of prudence, planning and knowing where to draw the line

One thought on “The Skull of the Slasher’s Monkey”